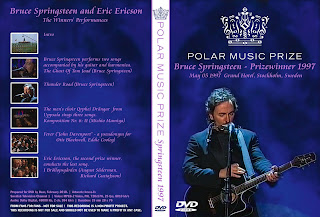 Bruce Springsteen performs two songs accompanied by his guitar and harmonica, then the men’s choir Qrphei Drängar (OD) from Uppsala sings three songs. The first two are conducted by Robert Sund. Eric Ericsson, the second prize winner, conducts the last song. Eric Ericsson was the conductor of OD for 40 years (1951-1991) and recieved the Polar prize for his ‘pioneering achievements as a conductor, teacher, artistic originator and inspirer in Swedish and international choral music’.

The woman sitting on the right of Bruce during OD’s performance is Princess Lilian, reportedly a huge Bruce fan. She was 81 at the time and is still alive although she has now retired from public life.

Playing through some of my old video recordings to see if I could find anything worth saving to DVD, I found this 20 min TV special from the 1997 Polar Music Prize ceremony with Bruce in an unlikely setting. He plays in the dining room at Grand Hotel for about 2-300 seated guests, then sits down at one of the candlelit tables to listen to a completely different musical genre. This is short but sweet. Enjoy!

Prepared for DVD and first uploaded to DIME by Bear, February 2010.